Home / What The ? / Does This Video Game Make My Ass Look Fat

How much more weight will you gain if you play video games all day. 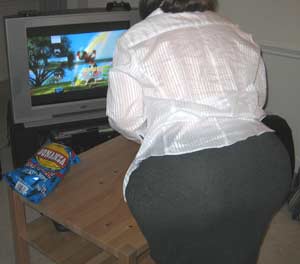 Well if you believe a resent Japanese study that just came out it’s 6 kilograms (13.2 lbs.). After 60 kids aged 8-14 years old spent 4 hours a day for 6 months playing assorted video games they averaged a gain of 6 kilos more than they should.

Each child was kept on their usual diet for the time that they were playing the games. Each was given regular breaks at 30 minute intervals. It was found that the children tended to gorge themselves during their breaks even though they were allowed to snack while playing.

While there was no difference between the boys and the girls in the amount of weight gained there was however a 3% greater fat gain in the girls tested. Water consumption was also higher with the girls. They requested almost a liter more of water during the game time as compared to the boys.

The same company is currently conducting a similar experiment with 20-30 year olds. They are playing for 8 hours per day for a one year test period. The test it scheduled to finish this November.

Courtesy of The Chunichi News.
Thanks to the Lawyers at CLB