This is a much smaller version of the PONG game that was invented back in 1966 by Ralph Baer and became very popular in the seventies. The game can be played with one or two players. You can do most of the things in the original like, pick beginner or advance skill level and the ball even speeds up the longer you play.

This microPONG game works basicly the same as the original 1966 design. However, in this pictured version the hardware one-shots have been replaced by software based delays. Quite a number of micro controller type PONG games have been posted or published on the internet. So far this is the smallest microPONG version, it uses an 8 pin PIC processor, and is the only one that uses 2 potentiometers for the moving bat controls, just like the original PONG game. 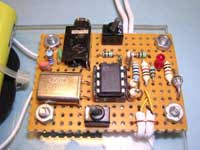 And here is your link to the man who built it. http://members.chello.nl/r.dekker49/upong/upong.html