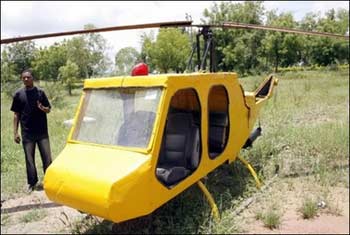 A 24-year-old undergraduate student in northern Nigeria, builds his own helicopters from the old parts off of cars and motorcycles in the back yard at home.

The copter has been flown on 6 occasions, is made from scrap aluminium that Abdullahi (The builder) bought with the money he makes from computer and mobile phone repairs, and a monetary gift from his father, who teaches at Kano‘s Bayero university.

The Helicopter is powered by a used 130 horsepower Honda Civic car engine and fitted with seats from an old Toyota car. The rest of the parts come from the remains of a Boeing 747 which crashed near Kano years ago.

This is a rather big aircraft, it has four seats and it is 25 feet long. It has never gotten more than 15 feet off the ground. The cockpit includes a push-button ignition, an accelerator lever between the seats which controls vertical thrust and a joystick that provides balance and bearing.