Home / What The ? / Dog Swallows iPod – Owner Gets It Back The Natural Way 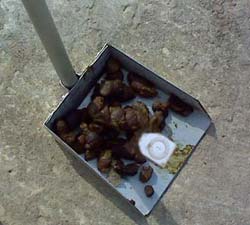 Last Friday in Dalton, Georgia 23 year old Mark Clamp found his iPod Shuffle he had been missing for the last 4 days. The bad news is it was sitting in the middle of a pile of poo his dog Frank had just left on the back walkway.

“I had just about given up on finding my iPod”, said Clamp. He had scowered his apartment and car the last few days with no luck and had planed on getting a new MP3 player before he made the discovery.

“Frank has never pooped on the walkway like that before. I think he just wanted me to find my iPod. He usually has a few normal places he goes when we are out on our walks. It was a big surprise to find it like that”.

When posed with the question”does the iPod still work” Clamp stated that after a long tough cleaning process he is happy to report that it held up fine and is working as good as ever.