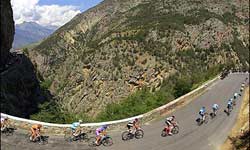 Two spectators were arrested by French police for emitting a radio signal to block rival teams of Deutche Telecom.

The men used the device to try and stop the radio communication between riders and their team cars. They were willing to help their favorite team any way they could. After complaints from many teams on the next to last climb during Sunday’s stage 8 the signal was found to come from the men’s RV.

Altering radio communications can be considered a major offense in France and the two might see jail time. It is the second time this has happened at the Tour De France and The Tour has implemented precautions to help control such attacks say local law enforcement.