Electronics and computer video game chat can cause trouble. Please watch what you say to people online. PC games are just that, games.

Mexico City, Mexico-(MH)-Mexican World of Warcraft player Bronco Carson reported to local police on Saturday that 3 men broke into his home and beat his arms with clubs and smashed his computer. It was supposedly in retaliation for Carson stalking and repeatedly killing one of the attackers wife’s character during computer video game play. 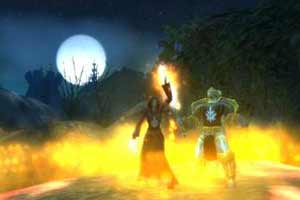 Carson admitted to police that he had been “making it hard for her to get far in the game.” He said that after repeated online threats from the woman, she sent her husband and friends over to his house to “take care of him.” Carson later said that he had made the mistake of telling her where he lived and “if her husband was man enough to just come meet me to settle this.”
2 weeks leading up to the assault he said he had been harassed by a few characters constantly during game play. “I knew that I might be messed with in the game but I didn’t really expect her husband to come looking for me. I couldn’t have been more wrong.”

Carson suffered 2 broken fingers and a fractured wrist during the assault. They also destroyed his computer and entertainment center before leaving. No arrests have been made in connection with the assault.