The Rules of the Brawl
Super Smash Bros. Brawl like in previous releases in the series, Brawl places players within a different, but easy to use fighting system. Players choose a character, select one of the numerous stages–which are levels based in the game worlds represented in Super Smash Bros.– and try to knock their opponents off the screen using a range of standard techniques and combos as well as a variety of special attacks and â€˜Smash Movesâ€™ specific to their chosen character. A Smash Move can only be performed after securing a â€˜Smash Ball.â€™ These precious items, marked with the Smash Bros. logo, fall randomly and can be used by either player, but they must be cracked open before they can be used. To keep things interesting they can also can be stolen if not used right away, so when a player sees one it must be grabbed quickly and cracked to avoid an unfortunate turn of events. 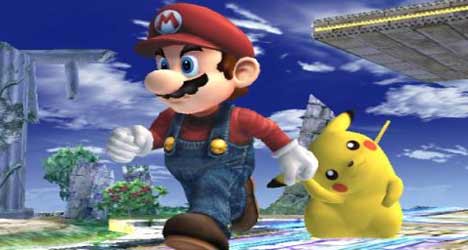 To use Zero Suit Samus at the start of a match, select Samus on the character screen and hold the following button before the match starts with the corresponding controller that is being used:Gamecube/Classic controller: Hold the R button
Wii Remote with Nunchuk: Hold the Z button
Wii Remote: Hold the Minus (-) button

Note that this also works with stages like Mushroomy Kingdom.

Switch from Samus to Zero Suit Samus at any time

At any time during a match, use an Up Taunt, a Down Taunt, and an Up Taunt. You must do it very quickly, and it is not a Final Smash, so you will not do damage.