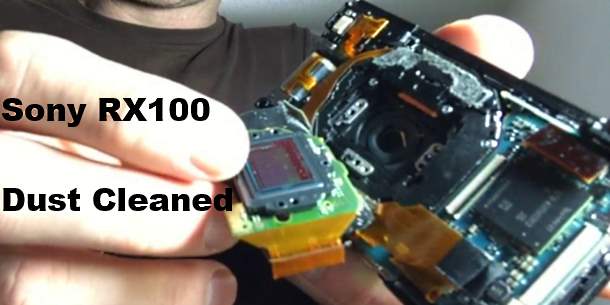 Video of a used Sony RX100 taken apart and broken down to try and remove lint and dust from the camera sensor.

The Sony Cyber-shot DSC-RX100 does not have a very well sealed sensor and they tend to let dust particles in around the opening of the lens when extended for shooting.

As you can see in the video he finds loads of dust on the sensor and later cleans the Sony RX100 out some with a few shots of compressed air. It looks the air trick might be the first thing to try and clean out your camera before opening it up and possible causing damage to the body.

Save breaking open the body of the RX100 as a last resort or if you can afford it, take the camera to a qualified repair shop. I have had a camera similar to this cleaned for under $50 and it came back spotless.