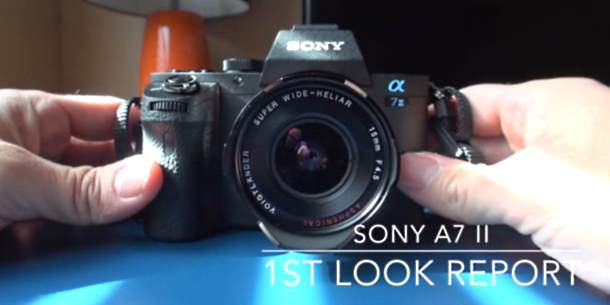 Take a video look at the Sony A7 II that is the latest full frame mirrorless interchangeable lens camera in the series. This year there are new features and a couple of important upgrades including 5-axis image stabilization. This is a world’s first in a full frame camera plus improved autofocus responsiveness.

People refer to the new Sony a few different ways. The A7 II (or ?7 II, or Alpha 7 II, depending on how you like to refer to your new cameras). 24.3-megapixel CMOS sensor paired with a BIONZ X image processor, and still has a maximum ISO range of 50 to 25,600 along with a fast continuous shooting speed of 5 fps.
The biggest upgrade we get is the inclusion of 5-axis image stabilization, which is a first for a full frame camera. This works whether shooting stills or video, and detects camera shake including angular shake, shift shake and rotational shake and then corrects it by moving the sensor to reduce picture blur. This gives over 4 stops of shake reduction, and means that users don’t always need lens stabilization help.