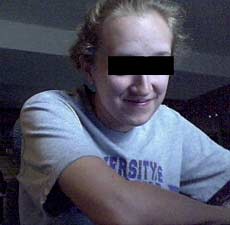 Linda Griffin received a frighting phone call last week from someone who claimed to be watching her. Before she listened to the man any longer she hung up on him thinking it was just a prank. The next night he called back. She wasn’t as frightened this time as she was mad. Griffin, playing along with the man, asked him if he was really watching her, then what was she wearing. When the man described her night shirt exactly she panicked and called her neighbor to come over and spend the night.

Griffin said: “I just couldn’t figure out how he knew what I was wearing. I am in a third floor apartment and I have shades and curtains that block anyone from seeing into my windows”. She called her local police to report the frighting call and try and get some help. Griffin said the police wouldn’t even come out to her home and she filed the report over the phone.

“Almost a week passed without the man calling back so I wasn’t worrying about it anymore”, said Griffin. That changed the next day when she came home to find her laptop background to now show a picture of herself siting in front of her computer. Thinking that the man was inside her apartment she ran next door to her neighbors and called the police.

The police came and searched the apartment and discovered nothing. After going over what had happened the police figured out that the picture on her laptop had come from the built-in webcam on Griffin’s computer. Never having added any type of virus control on her computer, had allowed the person to access Griffins webcam and he had been watching her for what could have been weeks without her knowledge.

Though this has happed in the past it is now rare with most people using virus control and firewalls to deny outside access to you computer. Officers told her that as long as she is connected to the internet all it takes is for the right Trojan to get through and it could happen again.

Griffin said she plans on leaving a piece of tape over the eye of the webcam and investing some new virus software before going back online.

Source is the Charlotte OB. Thanks.