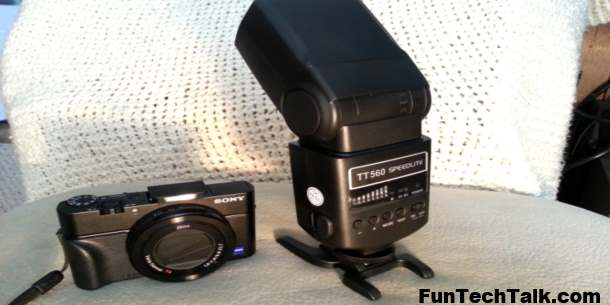 The Sony DSC-RX100M3 III does not have a built in hot shoe to clip on a large flash. No problem with the RX100m III as all you will need is a slave capable speed flash.

Since the newer Sony RX100m III has a built in pop up flash you will be able to use the camera’s flash to trigger a larger and brighter external flash.

The speed flash you buy must have the option to be used as a slave flash that can be triggered from another flash source. You can also buy a simple flash sensor trigger if you already own a simple speed flash without the light trigger.

The flash I have had great success with when using in combination with the RX100m III is the Neewer TT560 Flash Speedlite (The light in the top image). It is almost always triggered by my little Sony camera.

Using the speed light to bounce off a white ceiling will greatly help fill a dimly lit room that your built in flash could never do. Adding an expensive speed light to your camera bag is one of the best first purchases you can make for your Sony RX100m III.