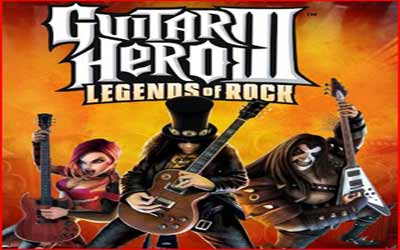 Guitar Hero 3 brings up the fun level with more challenge and new modes, and even though everything new is not terrific, the incredible tracklist and gameplay will keep you and your friends happy for days.Guitar Hero III: Legends of Rock Cheats

To make it impossible to fail a song, insert the following code in the in-game cheats menu. Keep in mind

To unlock Hyperspeed, go to the in-game cheat menu (found under Options) and insert the following cheat on

To unlock any boss characters as playable character, simply beat them in the game and they will become

Unlockable: Through the Fire and Flames

To unlock the track “Through the Fire and Flames”, beat the game.

To unlock all of the game’s songs for Quick Play Mode, insert the following notes in the Options menu:

To unlock songs in the normal fashion, simply pass the song successfully. It will thereafter be unlocked.

You can unlock Tom Morello (of Rage Against the Machine), Slash (of Guns N Roses/Velvet Revolver), Lou

(the Devil in the game), and a character called MetalHead by beating them in the game and then purchasing

To unlock the Jolly Roger Guitar, get five stars on each song during Career Mode on Medium difficulty.

To unlock the Nemesis 13 Guitar, complete Co-Op Career Mode on any difficulty.

To unlock the Bat Guitar, get five stars on each song during Career Mode on Easy difficulty.

To unlock the Neversoft Skateboard, complete Co-Op Mode on expert with five stars.

To unlock the PendulAxe Bass, complete Co-op Mode on expert.

To unlock the Tiki Guitar, complete Career Mode on hard with five stars.

have to check the store when you’re done inserting the password to see if it worked:

To make the singer on stage appear as Bret Michaels of Poison fame, insert the following code at the in-

Mode), strum without holding any frets down. When you lose, select the Tutorial option at the Game Over

menu. Do the Guitar Battle Tutorial and play through it in its entirety. After the “Lesson Complete”

message appears on-screen and the next fret board appears, pause the game and exit. This will bring you

back to the Lessons menu.

From here, press the red button, which will bring you back to the list of songs. The battle with Lou

should be highlighted. Choose the song, and Lou’s note chart will be set to Easy Mode now. Your note chart

will still be in Expert Mode, but Lou’s will be in easy mode.