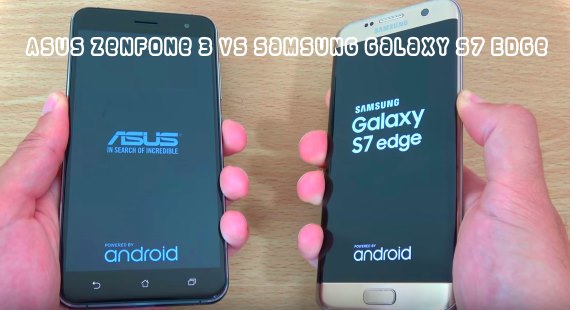 Take a look at the speed, camera, and gaming quality between the Samsung Galaxy S7 Edge and the Asus Zenfone 3.

The Asus Zenfone 3 is more of a midrange device. The ZenFone 3 brings four-axis optical image stabilization to its 16-megapixel rear camera and it’s crazy to see this feature in this price category. It means that photos will be more in focus when there’s motion, like jittery hands or a small earthquake. Up front, you get an 8-megapixel shooter for selfies and video chatting. The ZenFone 3 is the first device to sport Qualcomm’s new 14 nanometer Snapdragon 625 octa-core chip.

The Samsung Galaxy S7 Edge has two variants: one running the Snapdragon 820 quad-core CPU from Qualcomm (available in the US) and the other using Samsung’s own Exynos 8890 octa-core CPU for the rest of the world. Both chips are paired with 4GB of RAM. The camera resolution has dropped to 12MP, but don’t let that worry you. That pixel quantity makes for quicker autofocusing, and much more impressive low light performance eve for night photos.