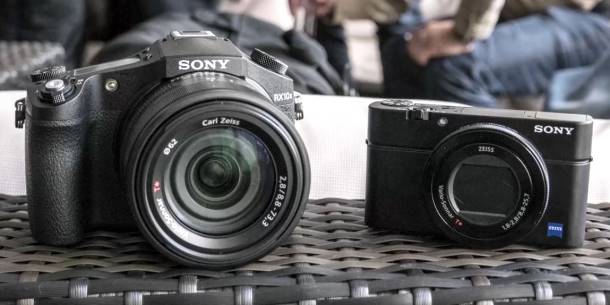 Camera specs for the RX10 Mk2 and RX100 Mk4. These new cameras by Sony have the same 20MP 1 inch sensor as the previous models.

The sensors have an upgraded version from previous models, even if the resolution and sensitivity (100/125-12800) specs haven’t changed. But what is more important is that both cameras include the world’s first stacked image sensor with a DRAM chip. DRAM is similar to the Random Access Memory you can find on your laptop or desktop computer. It allows the camera’s image processor to work 5 times faster than usual with a 5x faster readout. Concretely speaking, this means that the camera is capable of a higher performance output.

Both Sony cameras can record 4K internally with the XAVC S codec. The RX100 IV has a cap of 5 minutes while the RX10 II can record up to 29 minutes with no issues. The limit on the Sony RX100 M4 is to prevent overheating. More importantly, 4K recording is done with full pixel readout without pixel binning which reduces moiré and aliasing problems. During 4K recording, you can still take some still pictures in JPG mode at a maximum resolution of 17mp. Both Sony cameras have a clean HDMI output with 4:2:2 8bit.