Nintendo is bringing Mario and his friends with their finely tuned racing machines back and this time to the Nintendo Wii. With 3 different control styles and a Wii Wheel included in the box, Mario Kart Wii is bound to be the best in the series. 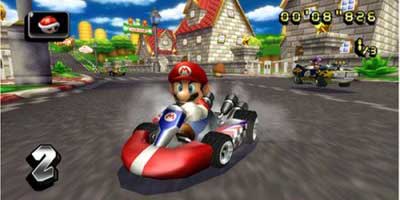 After meeting the requirements, some unlockables may require you to back out of your save file and reselect it.

After meeting the requirements, some unlockables may require you to back out of your save file and reselect it.

Have a star by your nickname

Playing extraordinarily well in Grand Prix races can produce a Star Ranking upto 3 at the end results instead of the standard “C, B or A.”Collecting these stars in all Grand Prix’s adds a Star Icon next to your name in WiFi Races and on the Results Screen for your opponents to see.

Use the wii wheel extensively in all the modes, when you go online a golden wii wheel will be next to your name.

When the countdown starts wait till the 2 starts to disappear and then press and hold the 2 button. So the 2 must still be visible but disappearing.
This will give you a boost at the start of the race.

Boost when recovering from a fall

When you fall into something, such as water or falling from rainbow road, when you land, if you hit 2 at the moment you hit the ground, you get a temporary boost.