An engineering student at UNC Charlotte was caught with a device made to block police photo radar. He used a switchable electric window glazing that turned his car license plates to gray at a touch of a button. 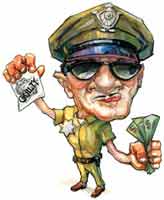 The student’s job caused him to work late at a local restaurant. Having to sit at a near by traffic light for what he considered to long made him come up with the idea to make a device to allow him to go through the red light with out the photo radar getting a shot of his plates.

He said he ordered the glass cut to the shape of his plates and wired a switch to his dash so he could darken his plates before going through the red light. After weeks of getting photos of the same car with no visible plates local police waited for him at his usual red light. With in 2 hours they caught him coming home from work.

After being confronted by police he admitted he knew it was wrong but it took almost 5 minute for the light to change at the intersection and it was worth the risk of getting caught.

The glass he used to cover his plates was a liquid crystal suspended particle device (SPD). It contains molecular particles suspended in a solution between plates of glass. When not activated, the particles move randomly and collide, blocking the direct passage of light. When energized, the particles align rapidly and the glazing becomes transparent. This type of switchable glazing can block up to about 90 percent of light.