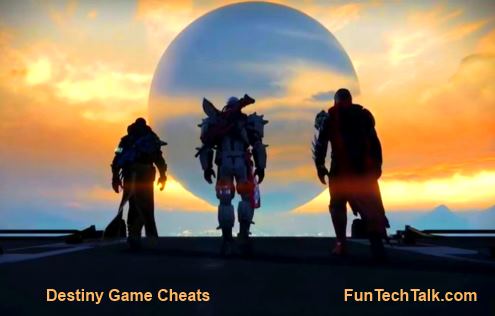 Destiny Game Cheats – From the Creators of Halo and the company that brought you Call of Duty. In Destiny you are a Guardian of the last city on Earth, able to wield incredible power. Explore the ancient ruins of our solar system, from the red dunes of Mars to the lush jungles of Venus. Defeat Earth’s enemies. Reclaim all that we have lost. Destiny Video Game Tips Below.

Login to your Bungie.net account, and redeem the following codes at their code redemption page to unlock the corresponding bonus. Note: You can obtain the emblems and shaders from the Special Orders Vendor in the Tower.

Collect the listed number of gold chests in the indicated location to get the corresponding reward:

In Old Russia (Level 4-10), start the Cosmodrome Patrol. Summon the Sparrow, and take the left path to reach the Forgotten Shores. Enter the shipwreck area straight forward from the entrance. Jump onto the deck, and kill the enemies. Then, go to the back of the ship, and jump onto the crate to reach the platform above, where you can jump onto the landing around the smokestack. While standing on the smokestack, a group of enemies will spawn below. Use grenades, rockets, and special abilities to quickly kill them. Once they have all been defeated, simply climb back up onto the smokestack to make the enemies spawn again. Repeat this process as many times as desired. If you are below Level 10, you should gain levels with approximately 10-20 minutes of farming XP using this method.

During the “Sword Of Crota” mission (Level 7-14), you will get a powerful sword weapon that kills all enemies, except the Swarm Princes, with one hit. In the last room of the dungeon, grab the sword, and kill all enemies with it until only the third (and final) Swarm Prince remains. Let it kill you to start back at the beginning to fight all the enemies again. Repeat this process as many times as desired. Make sure to not kill the final Swarm Prince or else you will not be able to use this method any longer. Killing the Swarm Princes yield good XP, and killing each wave of enemies is very easy with the sword.
Easy glimmer

Disassemble gear you are no longer using at the inventory menu to remove the item from your inventory and be rewarded with some glimmer and materials.

To earn extra glimmer in combat, use Ether Seeds. They are dropped randomly by defeated enemies, and increase glimmer drops from enemies for 10 minutes. Make sure to use Ether Seeds while farming for glimmer.

Once you reach Level 4, start the “The Warmind” mission, and proceed to the end of the mission where your Ghost interacts with the Warmind. Before interacting with the objective, use an Ether Seed to increase the amount of glimmer you will earn. Waves of Hive enemies will appear. Kill them until the large final Boss appears. Let one of the final enemies kill you. Then, try to leave a different Hive enemy alive so you can kill the Boss instead to get better rewards each time. There is no penalty for dying, and you will spawn back at the checkpoint. Let the last enemy kill you, then keep repeating as many times as desired. Once the Ether Seed effect ends after 10 minutes, use another one. Use this method to get approximately 1,000 glimmer every 10 minutes.

Once you reach Level 14 and can travel to the Moon, start the “Shrine Of Oryx” story mission. Set the difficulty to “Hard” or higher. When you are in the area where the Ghost says “There’s the Shrine! Find a way through!”, kill the approximately 7 to 9 Hallowed Acolytes (with yellow bars) in the large room with a pit to your left to get 45 glimmer for each one killed. It is found after two combat rooms and two large tube hallways. Once you have defeated the Hallowed Acolytes, jump into the pit on the left to instantly die, then repeat the process as many times as desired. There is a checkpoint immediately before this room. Follow the ramp up, and defeat the first group of Hallowed Acolytes, then jump down to defeat the second wave of Hallowed Acolytes. Use grenades and Super Charge to kill them more quickly. Ignore the Ogre and Dregs to kill all the Hallowed Acolytes within a few minutes. Use this method to get approximately 4,000 glimmer every 10 minutes.
Refilling ammo for free

Gear drops at the following rarity levels: basic, uncommon, rare, legendary, and exotic. Any gear above basic will often have perks you can purchase once a certain XP level has been reached. Like gaining levels, weapons and armor will eventually unlock new upgrade options. XP is shared between equipped gear and your level. Thus, gaining 500 XP toward your next level will also gain 500 XP toward ranking up an equipped weapon or piece of armor. However, weapons and armor usually require much less XP to rank up compared to leveling up. Before using the following method, make sure the gear you want to upgrade has abilities attached to it. While hovering over a weapon or armor piece, grayed out abilities will appear below the regular stats if there are abilities you can upgrade. Press Y to view the upgrades that are available on the gear. Before turning in bounties (Crucible bounties recommended), equip the gear you want to rank up, then turn in the completed bounties to get the XP from the bounties added to your level and equipped gear.
Moving faster in Tower

While in the Tower, start sprinting. After a few steps, start jumping to speed up your momentum. When you land, jump again. Keep jumping while landing to keep your momentum, allowing you to travel more quickly in the Tower compared to running.
Badges

Successfully complete the indicated task to unlock the corresponding badge:

Successfully complete the indicated task to earn the corresponding medal:

Disruption: In a salvage match, neutralize the enemy probe.
Hat Trick: In a single life, capture 3 control zones.
Lockdown: As a team, hold all 3 control zones for 60 seconds.
Lone Wolf: In a team game, finish first on your team with 0 assists.
Nail The Coffin: Score the winning points in a match.
Objectively Correct: In a Control match, capture the most zones.
On The Bright Side…: Achieve the highest score in a match despite your team’s loss.
Relic Hunter: Help capture 3 relic zones in a salvage match.
Saboteur: In a salvage match, neutralize the most probes.
Salvage Crew: As a team, salvage 3 relics in a match.
The Best… Around: Achieve the highest score in a match while leading your team to victory.

Well this is all we have for now. Good luck with your Destiny Video Game Cheats, Tips, Tricks And Help For PS3, PS4, Xbox 360.