Home / What The ? / Woman Fired For Sitting On USB Massage Ball At Work 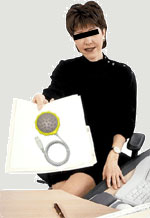 Charlotte, N.C. U.S.A.(CP)- Woman files compliant against Prackasaw Inc. for what she calls an illegal firing.

Prackasaw Inc. is a small textile distributer which employs 17 people. The woman fired was the front desk receptionist.
The business claims the woman would sit on a massaging ball that was powered by her desktop computer and refused to not use the device during work hours. After repeated warnings the company fired her for not complying.

The woman claimed to only use the massaging ball to relieve muscle spasms on her inner thighs. She is a avid runner and would plug the massager to the USB port on her computer and place it between her upper thighs to relieve the pain from a long run.

She is suing the company in hopes of recovering nine months of lost wages.