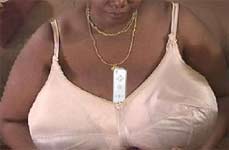 A K-Mart employee noticed that the once full peg hook in his electronic section was now missing the 6 Nintendo Wii remotes that he had just finished stocking a few minutes earlier. There had only been 2 “very heavy set women” in the electronics area in the last few minutes.

After searching the store for the 2 large suspects another employee spotted them leavening the bathrooms. Neither woman had the remotes in their cart. After checking the bathroom an employee found the 6 cut open and empty cases in the back stall. The women were asked if they had taken the Wii remotes and they denied it.

“Left with no other option” said store manager Mitch Greyson, “we called the police”. 2 officers met the ladies at the exit door and confronted them about the missing product. As the ladies denied taking the Wii remotes one of the officers noticed something bulging out from the side of the suspects breast.

While being searched by a lady officer back inside the store the remotes were recovered. The office said after one of the ladies removed here shirt she lifted her breasts and the 6 remotes just fell to the floor. She had basically just stuffed them under there and the bulk of her breasts held the Wii remotes in place. Both ladies were arrested on the spot and taken in.