Home / What The ? / Never Stop A Computer Fan With Your Tongue

The other day I was over at my neighbor’s house giving him a little tech help. He is a bit of a slob and any trip to his house can be an adventure.

When I arrived he had computer parts and assorted junk scattered around the living room floor. He had the case open and was trying to figure out how to install his new graphics card. I was greeted buy his familiar “just getting everything ready for you.” That usually means he has already screwed up something and I need to fix it. 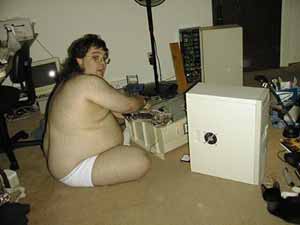 My neighbor Tim usually doesn’t drink a lot of beer but with it being Labor day weekend he was letting lose. From the looks of the emptys on his kitchen counter he had already had 8 beers. A drunk guy with no electronic knowledge trying to install a graphics card was indeed in need of help.

Not wanting to spend to much time there I quickly put the card in and fired it right up without any problems. That was until Tim ,being mesmerize by the spinning processor fan, decided it would be funny to stop the fan with his tongue.

With the computer laying on it’s side in the floor he jammed his big head in there and it buzzed to a stop. We both laughed out loud for a second until Tim raised up and knocked his bottle of beer off the table right into the running computer.

After a short flash and some blue smoke rose out of the computer case we both stopped laughing long enough to let out an “O’ SHIT!” Tim said he planned on calling Dell on Tuesday morning.