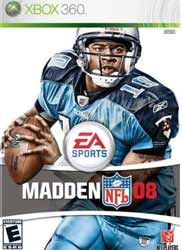 The newly released Madden NFL 08 is much more than just a visual upgrade from Madden 07.

The most immediate things you may notice while playing your first game is the new player weapon system. This lets players decipher who the playmakers are on the team, as well as which ones are good in certain situations. There are twenty weapons, ranging from a press coverage defensive back to an accurate quarterback, and cover all facets of the game. Not all players are a weapon, thus giving the honor of being one a pretty big deal. Before the snap of the ball, the weapons on the field are highlighted for each team. This is done with an icon that appears under each special player. By seeing these playmakers before the snap, you can adjust your defense or offense to prevent or exploit mismatches. If you’re playing on defense and see a big weapon on the other team’s offense, you might want to set another defender to pay a little more attention to that player.

Once the ball is snapped all of the icons disappear and the play resumes as usual. If a quarterback has a strong rating in throwing power, then he is labeled as a Cannon Arm QB. Every weapon has it’s own set of strengths and weaknesses. The Cannon Arm QB skill is very good at launching the deep ball or throwing a bullet pass over the middle, but on the other hand, the same quarterback may not be able to put the ball where he wants it to go. Thus resulting in off passes, sometimes flying over the receivers head or in the arms of a defensive back. The game has information on each weapon class, as well as good tips on how to counter them while on the field.

Here is some of the currently found unlockables. Cheats will be added as they are found so check back soon.