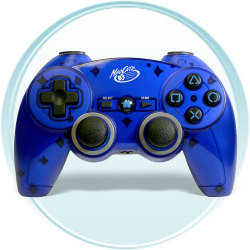 I just received the new Mad Catz PS3 wireless controller a few days ago for testing. So far I have been very surprised at how well this controller is built.

Sometimes after-market controllers are a noticeable step down from the stock controllers that come with the system. Ruff seam edges and sticky buttons tend to be the norm. The Mad Catz PS3 wireless controller has none of these problems. Just a clean solid design that functions like it should.

The only problems that I have come across so far are the trigger buttons on top are not quite as smooth and springy as the playstation 3’s controller. Also the 2.4 GHz wireless signal does not broadcast quit as far but you can still play just fine from 20ft away.

Overall for an early controller release I believe the Mad Catz controller to be worth the money.It feels good in my hand and the great looking blue that it came in is a nice change from the dull PS3 Controllers color.

currently has this controller cheap with free shipping. Just search for model MOV088460-BLU which was reviewed here.